BC Scores The Highest for the Provincial Energy Scorecard

What the Provincial Energy Scorecard Measures

Provinces are judged on five main categories:
Energy Efficiency Programs (35 points)
Enabling policies (22 points)
Buildings and Infrastructure (18 points)
Transportation (17 points)
Industry (8 points)
Our province dominated three categories- enabling policies, buildings & infrastructure and industry, bringing our total to an impressive 56/100 points.
Not far behind was Quebec, Ontario & Nova Scotia who show impressive signs of energy efficiency within their own provinces.
The BC Energy Step Code Secured The Win for BC
The BC Energy Step Code was the strongest contributor to our provinces win of 2019. The code focuses on increasing energy efficiency in new and existing infrastructure through new and/or advanced technologies, such as automated airsealing or solar panels. Rebates for builders through this program are pretty notable, as are the residual savings for new homeowners in the Okanagan through decreased utility bills.
So, it really isn’t a surprise that our provinces leading energy efficiency program plummeted us into the top spot on a nationwide level.
The BC Energy Step Code has one primary goal: make all new buildings net zero by 2032. While participation above Stage 1 is voluntary at the moment, this will soon change as local governments push for higher stages to become mandatory for new home builders.
In as a little as five years, new home builders in the Okanagan can expect Stage 2-3 to become mandatory during new construction (and yes, take the rebates of these stages with them!)
More about the BC Step Code and Stages can be found here.
Mandatory legislation aside, new homeowners and new home builders in BC are recognizing the value of adopting additional energy efficiency practices within new developments. This paves a positive path for British Columbia and their quest for net zero homes.
BC Is Tackling the Biggest Problem with Energy Efficiency
Although somewhat obvious, there is a reason that The BC Energy Step Code ensured a top placement for British Columbia.
Our homes, offices and community buildings are the #1 energy suckers in our province.
“British Columbia’s top rank is due largely to the BC Energy Step Code for buildings, ambitious natural gas savings, and significant progress in vehicle electrification,” said Dr. Brendan Haley, the study’s lead author and the policy director at Efficiency Canada.
29% of final energy demand comes from buildings in BC, and 12% of greenhouse emissions. Perhaps the largest industry benchmarked in the Provincial Scorecard, the building sector offers extensive opportunities to decrease final energy output province wide.
In BC alone, the building sector must aim to cut their emissions by 77-80%, but doing so is consistently more challenged due to the projections of total floor area in most upcoming new developments. An increase in total floor area and the need to decrease emissions means only one thing- significant improvements in energy efficiency tactics during new construction.
Going Beyond the Base Energy Code 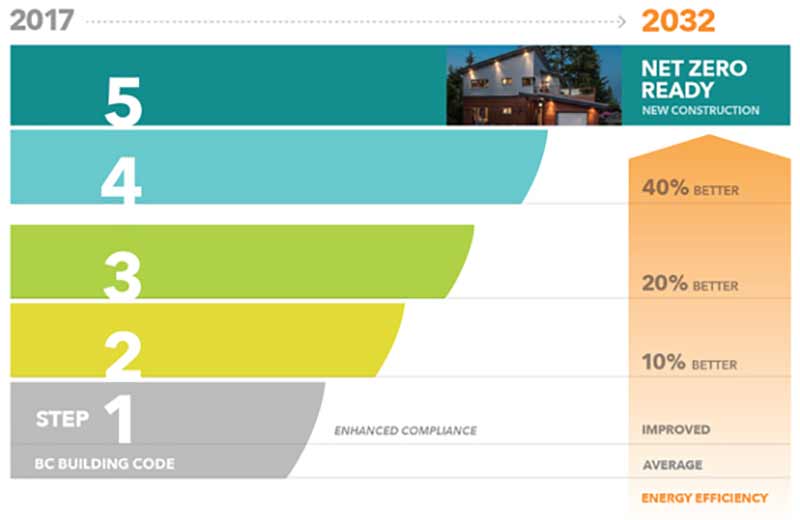 New home builders in the Okanagan are eager to surpass the base stage of the Step Code (above)- voluntary now, but soon to be mandatory as time goes on. High performance materials and systems in new homes are becoming increasingly affordable and available to developers- so much so, that the building industry will begin to integrate new techniques into all new buildings.
By 2032, The BC Building Code will change their minimum requirement to higher stages of the BC Energy Step Code. The National Building Code of Canada is simultaneously chasing the same outcome by 2030.
BC Is Ahead of the Energy Efficiency Curve (h2)
British Columbia has always been ahead of the curve when it comes to energy efficiency. Our province was the first to introduce revenue-neutral carbon tax, or a “pollution levy”- which continually lowers greenhouse emissions and plummeted our provinces name into the mentioning’s of the most successful climate policies in the world.
The BC Energy Step Code is no different. BC is the first to do it, and their efforts have been recognized.
BC is home to Canada’s first net zero house in Saniich- an impressive home boasting open concepts, strategic design, triple pane high efficiency windows & doors and high performance airtight building envelopes- completed by revolutionary automated airsealing technology.
It’s not really any wonder that BC has worked towards, and become, Canada’s energy efficiency leader. Industry professionals have projected that British Columbia will be the first province to achieve The Net Zero Movement within our building sector; the design and implementation of energy efficiency programs surpass other provinces in most areas.
The dedication and enthusiasm from new home builders in BC, and new home owners alike, make a great contribution to the longevity and success of the BC Energy Step Code. The rebates for new home builders certainly help too.
And, it was this code that threw us into first place rankings for energy efficiency on a nationwide scale.
To us, that’s something to be proud of and something we love to hear.

1 thought on “BC Is Canada’s Energy Efficiency Leader”